Geek Sync Webcast : New Features in SQL Server That Will Change the Way You Tune

Since the new cardinality estimator was released in SQL Server 2014, every version of SQL Server has introduced new features designed to help your queries run at max performance. In 2016, it was Query Store; in 2017, Adaptive Query Processing and Automatic Tuning have been introduced.

Join IDERA and Lance Tidwell as he explores these new features and how they can make your life easier as a DBA. Lance will also look at some of the pitfalls and potential issues that can arise from these features. This is a special Geek Sync you will not want to miss!

Lance Tidwell, from the Austin, TX, area, has worked as a SQL Server DBA for the last 11 years. During his time as a DBA he has found his passion for all things SQL, but specifically for performance tuning. He has a life-long quest to always be learning new things; currently this quest has lead him to explore more about the Data Analytics/ Data Science areas, as well as working toward the Microsoft Professional Program Certificate in Data Science. During his spare time, he volunteers at his son’s school as a member of Watch D.O.G.S. and as an off-ice official for the American Hockey League (AHL). 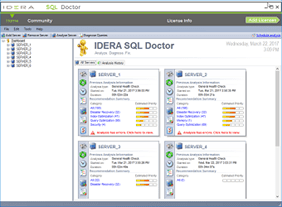