As the data in the database tables of Microsoft SQL Server changes, their indexes change. Over time these indexes become fragmented so that ordered data retrieval becomes less efficient. Consequently, the fragmentation adversely affects the performance of SQL Server.

The following is a summary of the key topics covered in the whitepaper:

Juan Rogers was the product manager and evangelist of the portfolio of security and compliance products of IDERA. 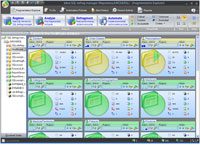